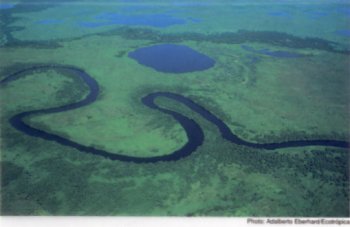 The Pantanal is an immense alluvial plain which is situated along the northernmost part of the Paraguay River and its tributaries and which becomes extensively flooded during the rainy season. The Pantanal is contained within the Upper Paraguay River Basin. Roughly one-third of the basin is the complex and vast low-altitude floodplain known as the Pantanal, and two-thirds is the “Planalto” or highlands. These upland areas include the Gran Chaco of Bolivia and Paraguay and the Brazilian highlands.

The Paraguay River (in Portuguese, Rio Paraguai; in Spanish, Río Paraguay), the feature that gives the Paraguay Basin its name, begins in the northern part of the watershed and extends some 2,550 km southward to near Corrientes, Argentina, where it combines with the Paraná River. The headwaters of the Paraguay are located in a slightly pronounced rise, the “Chapada dos Parécis,” that divides the Paraguay sub-basin from the headwaters of some Amazon tributaries. Bonetto and Wais (1995) claim that both systems are actually in contact during periods of heavy flooding. Farther east, the Chapada dos Guimarães forms another physical barrier between the Amazon and Paraguay River Basins. Banks (1991) reports similar anecdotal evidence that streams from the two systems originate in the same headwater marsh. Downstream of its confluence with the Paraguay River, the Paraná River reaches 3,500 meters wide at Corrientes and courses southward to the Rio de la Plata Estuary between Uruguay and Argentina.

Major tributaries of the Paraguay River within the Pantanal include the Taquari River, Miranda River, Negro River and the Cuiabá River, as well as the São Lourenço River, which flows into the Cuiabá River, and the Aquidauana River, which flows into the Miranda. These are all left-bank (east) tributaries arising in Brazil. Bolivian and Paraguayan tributaries are notably smaller. One interesting feature occurs at Fecho dos Morros (Closing of the Hills), approximately 36 km upstream of Porto Murtinho.  Here the Paraguay River courses through a cluster of hills, which impact water flow and act as a grade control (Ponce 1995).

The Pantanal and Upper Paraguay River Basin extend into three nations. An estimated 80 percent of the Pantanal is located in central-western Brazil, in the two states of Mato Grosso and Mato Grosso do Sul. Another roughly 10-15 percent of the Pantanal extends into eastern Bolivia, and the remaining, smallest portion is located in northeastern Paraguay. (In Bolivia and Paraguay, the Pantanal is generally referred to as “el Gran Pantanal” or “el Pantanal,” while Brazilian sources often reference it as “Pantanal Matogrossense.”)

The Pantanal is indeed vast. Estimates of its size vary widely, depending on the particular research study cited. This variety is reflected in the diverse figures used in the various papers presented in this book. The most commonly encountered estimates place the area of the entire Pantanal of Brazil, Bolivia and Paraguay between 140,000 km2 (54,000 square miles) and 210,000 km2 (81,000 square miles).

One study delimiting and quantifying only the Brazilian Pantanal and its sub-regions is that of Silva and Moura (1998). Their report, whose figures are often cited, places the size of the Pantanal in Brazil at 138,183 km2, and the area of the Upper Paraguay River Basin in Brazil at 361,666 km2. According to their investigation, the Brazilian Pantanal is 38.2 percent of its associated basin. Silva and Moura considered various physiomorphological and ecological aspects related to surface relief features, flooding and drainage, soils and vegetation. They utilized previous studies related to delineating the Pantanal, as well as GPS, topographic charts, Landsat satellite 5 TM images and statistical municipal maps. Their study was further supported by field observations. By definition, the researchers consider the Brazilian Pantanal to be all of the continuous area inside the Upper Paraguay River Basin subjected to periodic flooding, and localized between Fazenda Barra do Ixu in the north (above Cáceres) and the confluence of the Apa River with the Paraguay River to the south (below Porto Murtinho).

A Brazilian government investigation which utilized mainly physiomorphological mapping and considered interactions between various physical and ecological elements, delimited and quantified the Brazilian Pantanal at a similar surface area of 139,111 km2 (Brazil Ministério do Interior 1979). However, an earlier, governmental investigation, which is also often cited but which employed less precise methodology, places the dimensions of the Brazilian Pantanal at 168,000 km2, the entire Pantanal of Brazil, Bolivia and Paraguay at 242,000 km2, and the entire basin of the three countries at 496,000 km2 (Brasil Ministério do Interior 1974). One analysis which considered only factors related to soils established the Brazilian Pantanal at an intermediate area of 153,000 km2 (Amaral Filho 1986).

By any measure, this is an immense region. Using as an estimate for the entire Pantanal 170,000 km2 (17 million hectares or 42 million acres) — and this is probably low — it would still encompass an area more extensive than many countries, including England, Austria, Hungary, Greece or Ireland. It is larger than 29 of the states in the United States, surpassing New York State, Wisconsin and Florida and an estimated 17 times the size of the remaining Florida Everglades. As a wetland system, it is likely unsurpassed. Indeed, using figures supplied by the World Conservation Monitoring Center, the Pantanal would comprise about 3 percent of the entire world’s wetlands.

The word “Pantanal” derives from the word “pantano” (pantano in Spanish, pântano in Portuguese), which generally translates as swamp, marsh, or bog. The Pantanal, however, is more than simply one of these specialized wetland types. The term designates a river floodplain region, an internal delta encompassing a variety of ecological sub-regions. One can find in the Pantanal an aquatic system of large rivers and standing water, terrestrial systems, and diverse types of riverine, palustrine and lacustrine “wetlands” — the transitional, halfway world between aquatic and terrestrial systems. As portrayed by Gottgens et al. (1998), the Pantanal is an “immense floodplain mosaic” which includes “seasonally inundated grasslands, river corridors, gallery forests, lakes and dry forests.”

In essence, the Pantanal is a huge lowlands, an immense alluvial depression of slight declivity along the Paraguay River and its tributaries that becomes extensively flooded during the rainy season. Just outside of the Pantanal’s borders, the landscape exhibits a gradient of about one-half meter to one-meter drop in elevation for every kilometer traversed. Within the Pantanal, this topographic slope drops to about 1-2 cm/km in the north-south direction and 6-12 cm/km in the east-west direction, an exceedingly slight gradient. When the extensive rains come during the wet season, the basin swells.

The average annual precipitation in the Upper Paraguay River Basin is not substantially higher than in many other sections of Brazil; it is about 800-1,600 mm or 32-64 inches. The largest annual average, on the order of 1,600 mm, is observed in the higher elevations, such as the Chapada dos Guimarães and the headwaters of the Vermelho River in the north and northeast of the region, where altitudes exceeding 600 meters are found (Brasil Ministério do Meio Ambiente 1997). The lowest average precipitation, on the order of 800 mm per year, occurs in the plain of the Pantanal to the northeast of Corumbá, where the altitude is around 90 meters (Brasil Ministério do Meio Ambiente 1997).

It is important to consider, however, that the Pantanal has two seasons: a wet season from roughly October to March, and a dry season from April to September. About 80 percent of the rain falls during the wet season. In the more northern latitudes, the rainfall is particularly concentrated between the months of January and March, during which up to 50 percent of theannual rainfall occurs (Brasil Ministério do Meio Ambiente 1997). An average rainfall of 250 mm (10 inches) during January alone is typical in the northern part of the basin. This concentrated rainfall, combined with factors such as the very reduced topographic slope, poorly drained hydromorphic soils, reduced runoff bed and small exit area, results in a flooded plain, which propagates from north to south and from east to west along the Paraguay River — the Pantanal’s only natural drainage route. About 70-80 percent of the Pantanal area floods each wet season. Water levels may be as much as five meters higher than during the dry season (Junk and Silva 1995).

This remarkable variability between seasons gives the Pantanal its character and impacts the fauna in predictable ways. The general response of riverine fish to flooding is lateral movement over the floodplains, and the main feeding and growing time for the fish tends to take place during this highwater period (Lowe-McConnell 1987). The start of the flood season also corresponds to the period when most riverine fish species breed, allowing the young to be born when there is abundant food and cover. Floodwaters spreading over the plain are enriched by nutrients, leading to an explosive growth of aquatic vegetation and microorganisms and subsequently a marked increase in the number of larger invertebrates used as fish food.

The onset of the dry season provides another scenario. As the water retreats, it leaves dry land for animals to graze that were previously inundated. It likewise strands sizeable numbers of fish which failed to return to the larger channels. The drying pools of fish left by the subsiding water provides a feast for wading birds such as Jabiru storks, snowy egrets and roseate spoonbills. The fish losses from the strandings are considered to be enormous (Lowe-McConnell 1987).

The Upper Paraguay River Basin is understood to be relatively new in geological time, created by (i) a wearing down of mountains on the Brazilian side (north, east and southeast) to form highlands of some 600-700 m above sea level, (ii) the creation of the Andes to the west, and (iii) the depression of the Pantanal area to form a virtual inland sea, which gradually filled with sediments. It is further speculated that this region was once connected to the ocean, accounting for the marine animal fossils buried in the shale and sandstone. The natural process of sedimentation gradually filled in the basin to an average height of about 100 meters above sea level. Sediments in the Pantanal are considered to be hundreds of meters thick.

The Pantanal itself is sparsely populated. In particular, the Bolivian and Paraguayan sides have very low human densities; they are virtually uninhabited. The Brazilian side, while more populated, also has a relatively low population density estimated at 30,000 to 300,000 inhabitants (including native Indian populations), depending upon how one is specifically delineating the region and which population centers are included.

In terms of political divisions, Silva and Moura (1998) report 64.64 percent of the Brazilian Pantanal is located in the state of Mato Grosso do Sul (MS) and 35.36 percent in the state of Mato Grosso (MT). According to their study, four counties or districts (municípios) account for almost three-quarters of the Brazilian Pantanal area: Corumbá, Poconé, Cáceres and Aquidauana. Those counties with the greatest percentage of their area designated as being within the Pantanal are Barão de Melgaço (99.2 percent), Corumbá (95.6) and Poconé (80.3), and with the least overlap with the Pantanal found in Bodoquena (1.8) and Lambari D’Oeste (15.9).