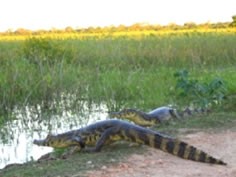 The Pantanal is an extensive plain of approximately 230,000 km2 and its area is in the heart of South America. This sedimentary plain is still undergoing geological formation and so is influenced by its two cycles.

During the wet season (November to April), the region is flooded as a consequence of the overflowing of its numerous waterways (rivers, lakes and streams), which form the Silver Basin: this is the time of an explosion of colors in the rich flora.

The animals, especially the mammals, look for “capões” – wooded mounds- where they shelter during this period.

It normally rains for about 2 hours in the afternoon or evening and much of the water flows in from places many miles away. In the dry season (May to October), the region presents small lakes, many of which are perennial, which constitute the food source for a great variety of animals including migratory birds from various parts of the Planet.

Approximately 700 species of birds; 100 of mammals; 80 of reptiles; 240 of fish as well as a great number of invertebrates still not classified, constitute the richest variety of fauna to be found in the Americas.